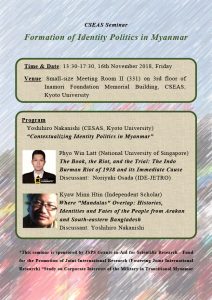 Abstract:
This seminar aims to discuss historical formation of identity politics in Myanmar with two young Burmese historians. Mr. Phyo Win Latt will talk about the book that was regarded by the colonial government as the occasion of the Indo-Burman Riots in 1938 in Yangon. Then he will discuss why Buddhists at that time found the contents of the book malicious and offensive, why the trial pursued against the author Maung Shwe Hpi and another author, the publisher and the printer of the book, and why some of the names associated with the books are remembered even today in public memory. Dr. Kyaw Minn Htin will give us a talk about the rise of the political power of Arakan kingdom in the sixteenth and seventeenth centuries and the colonization of Arakan by the British in the nineteenth century that had connected the peoples of Arakan (Western Myanmar) and Southeastern Bengal (Banga). He explores the importance of local and colonial narratives in formulating and strengthening cultural, ethnic, and linguistic identities of the peoples from the two regions through analysis of these historical cases. He argues that the production of British colonial maps and censuses has been of incremental importance in shaping the identities and further the rise of nationalism in post-World War II context.

Speakers:
Phyo Win Latt is PhD candidate from the History Department of the National University of Singapore. He also holds a Master of Arts in Political Science awarded by the Master of Arts Program in International Development Studies from Chulalongkorn University in Bangkok. His thesis deals with the rise of xenophobic nationalism during the colonial Burma in response to the presumed threat to the identity and political economy of the Burmese caused by massive immigration from South Asia. He is also one of the four founding members of the Yangon based Asia Myanmar Research Institute (AMRI).

Kyaw Minn Htin obtained his Bachelor of Engineering from Yangon Technological University, M.A. and Master of Research in Archaeology from Yangon University, Postgraduate Diploma in Asian Art from SOAS, University of London, and Ph.D. from the National University of Singapore. He has published numerous articles and participates regularly in international conferences on Southeast Asian Studies. His current research centres on the identity constructions, clash of nationalism, and citizenship issues of ethnic communities in Western Myanmar.

13:40-15:30
Phyo Win Latt (National University of Singapore)
The Book, the Riot, and the Trial: The Indo Burman Riot of 1938 and its Immediate Cause
Discussant: Noriyuki Osada (IDE-JETRO)