Heriberto Ruiz Tafoya received his Doctoral Degree in Economics from the Graduate School of Economics, Kyoto University in 2019. His profile is multifaceted. He has published papers, articles and specialized reports on Economic Development, Political Economy, Business Management, Social Entrepreneurship, and Regional Innovation. He has been lecturer of courses in the Economics field, government officer, entrepreneurial advisor, consultant, and activist and advocate of political and social movements since 1993.

Please tell us about your research.

My study is about the retail and consumption of corporate packaged food.1 My current focus is a comparative investigation of food-related skills at the household level in the urban poor neighborhoods of two global cities on different continents, Mexico City and Manila.

The approach to studying corporate packaged food is to use political economy as an umbrella framework, but to complement this with the sociology of consumption and cultural anthropology. While political economy framing enables analysis beyond the macro level, sociology and cultural anthropology provide more tools to study neighborhoods and households beyond the biased economic binaries of, for example, income-and-expenses and supply-and-demand.

Why did you choose to be a scholar and
how did you decide on your current research topic and approach?

I am still in the process of being a scholar. My current research is an extension of my doctoral research on the same topic. The topic of investigation emerged from observing the impact of the North America Free Trade Agreement (NAFTA), which rapidly transformed bodies, social relations, the economy, the environment, and culture in Mexico City’s urban poor neighborhoods, where I grew up.

Bodies are sick in Mexico, with a huge epidemic of obesity, diabetes, hypertension, kidney problems, and other health problems. Social relations are broken.

The economy is highly dependent on imports, and our peasants, who number approximately 10 million (the equivalent of the entire population of Cuba or Chile), move to the United States of America, where they are exploited as farmers. It is not only peasants, but also graduate students (including my sister, who has a master’s degree) who are working as temporary laborers in farms, restaurants, hotels, and hospitals of the USA. Many other peasants have been economically pushed to produce illicit crops such as opium and marihuana to survive, or are hyper-exploited in manufacturing, construction, and service jobs in Mexico.

The ecology in Mexico is highly affected, as the government removed ecological regulations after NAFTA. Maquila (cheap manufacturing) centers in the north, center, and west of the country have polluted countless rivers, soils, and lakes. Industrial garbage also has been imported from the USA to Mexico. Mining (mostly led by Canada and USA companies) has also destroyed dozens of ecosystems. Thousands of people have been killed by paramilitary and drug cartels expelling people from their territories during land grabbing for mining and agro industries. Indigenous political and social resistance exists, but indigenous communities face tremendous powers that challenge their existence day by day.

Culture has been transformed. For example, Mexico’s urban poor now eat plenty of instant noodles, which is a very recent cultural element. Until the 1990s, tortillas made from maize were the main processed staple food, but now bread (made from wheat or substitutes of wheat) and noodles are frequently eaten. Although maize tortillas are still commonly eaten, 70 percent of corn is imported from the USA and it is GMO corn. More than 300 varieties of maize have been lost in Mexico during the past 40 years. Similar situations can be found in the Philippines.

As such, a comparative study of food retail and consumption, particularly of corporate packaged food, in Mexico and the Philippines facilitates a more articulate analysis of the above-mentioned phenomena.

Please tell us about the impressive people, things,
and places that you have encountered in your research.

The kindness of people that struggle to live and move on is impressive, but to appreciate this kindness, one needs to be impressed by their circumstances, such as living with plenty of rats and cockroaches, particularly when it is dark, and you need to go to the toilet or take a shower. The first four days of my fieldwork I couldn’t sleep well. Rats chewed on and ate substantial parts of my laptop cord. If they eat wire, imagine what they can eat. Only canned food and good containers can protect food from their bites.

Rats and cockroaches are also present in the poor urban neighborhoods of Tatalon and Dakota, but in Payatas, the dumpsite was still open, and the smell of garbage was overwhelming. The quantity of rats and other dead animals and the garbage inside homes during and after the floods in Tatalon was also unforgettable. Pag-pag (the eating of leftovers, frequently rotten food) also impressed me. I knew about it but seeing it on site after the garbage truck arrives has a stronger impact, as it involves our five senses and self-reflection.

Many other things I witnessed that surpassed the levels of poverty and marginalization that I experienced in Mexico City (which were and are high), such as different constrictions of space and the quantity of rats and insects, stay with me as well. 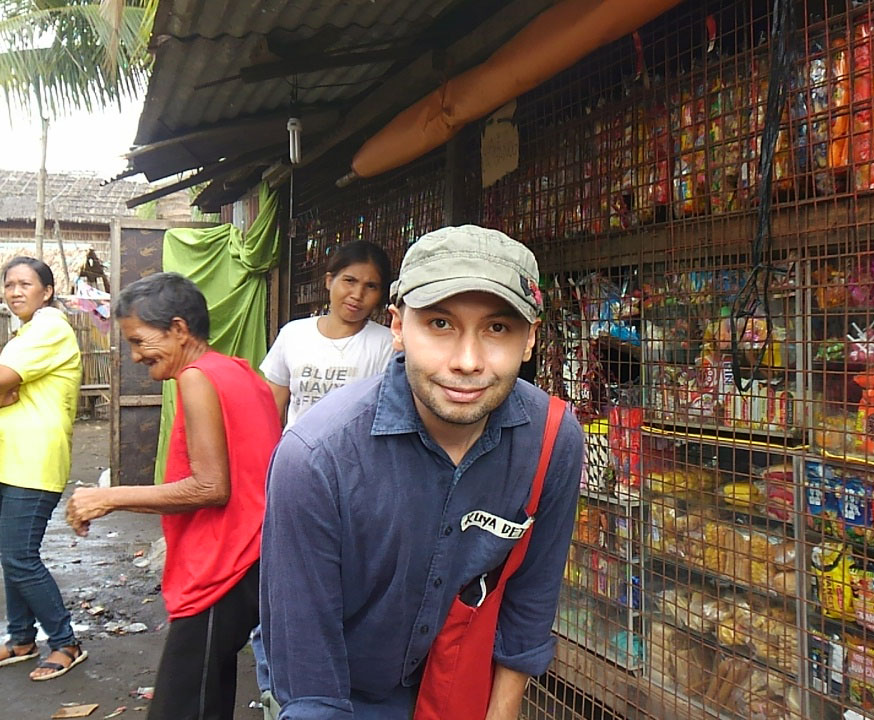 This photo very much communicates my object of study: corporate branded packaged foods in slums. Here is the periphery of Metro Manila in a Badjau settlement. At my back is a sari-sari store on its facade displaying a brunch of packaged foods that they sell. It’s a wall of colorful packaged foods in a slum. 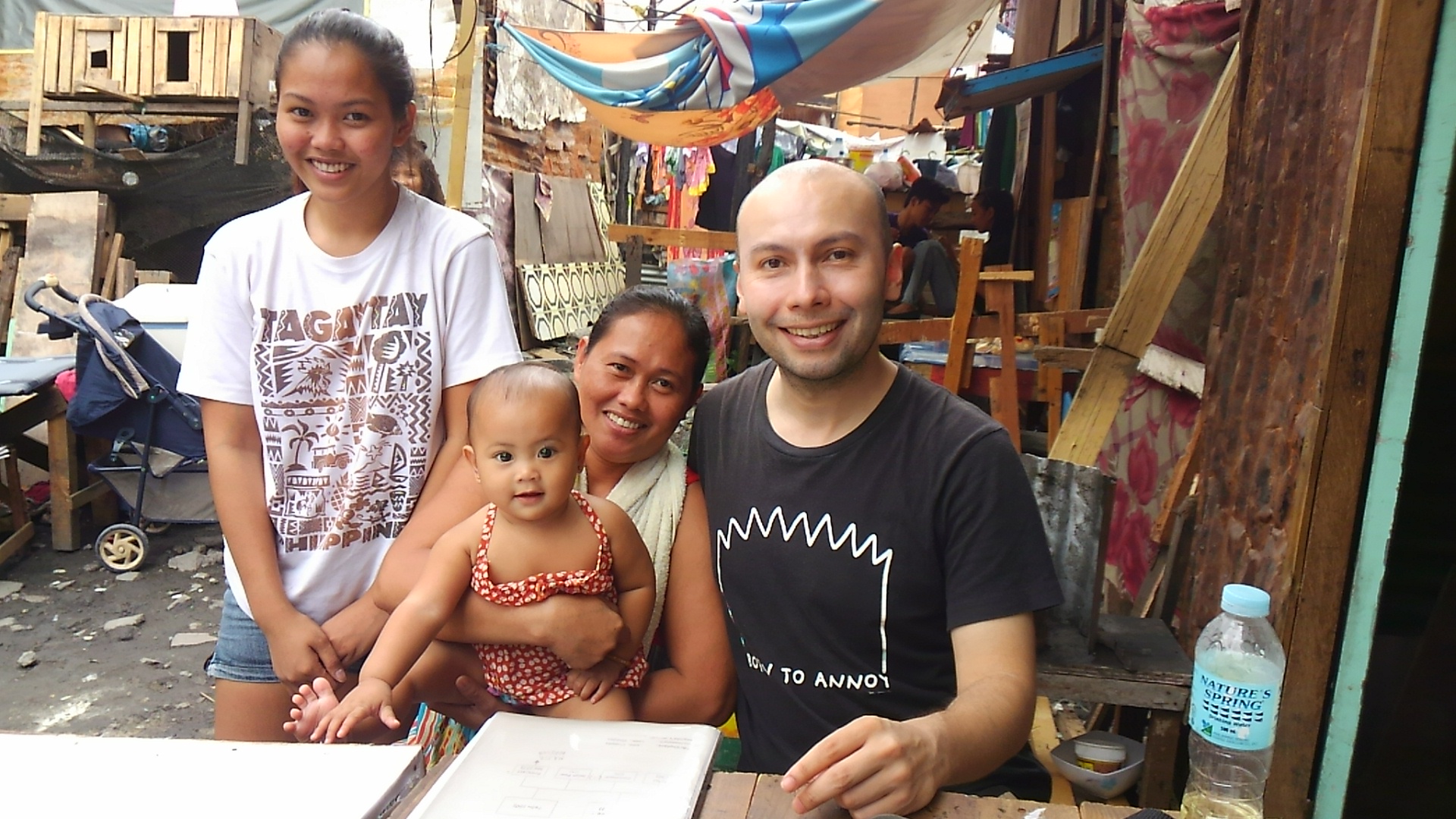 Here I am interviewing one of the Meralco families. The photo above shows the generation of women, the youngest a pretty one year old girl with beautiful eyes. In the back of that photo you can see the condition of slum material and the baby carriage. Also visible is my mineral water, as I did not drink the water that people normally drink. This was done out of caution and not out of snobbish attitude towards people’s drinks. 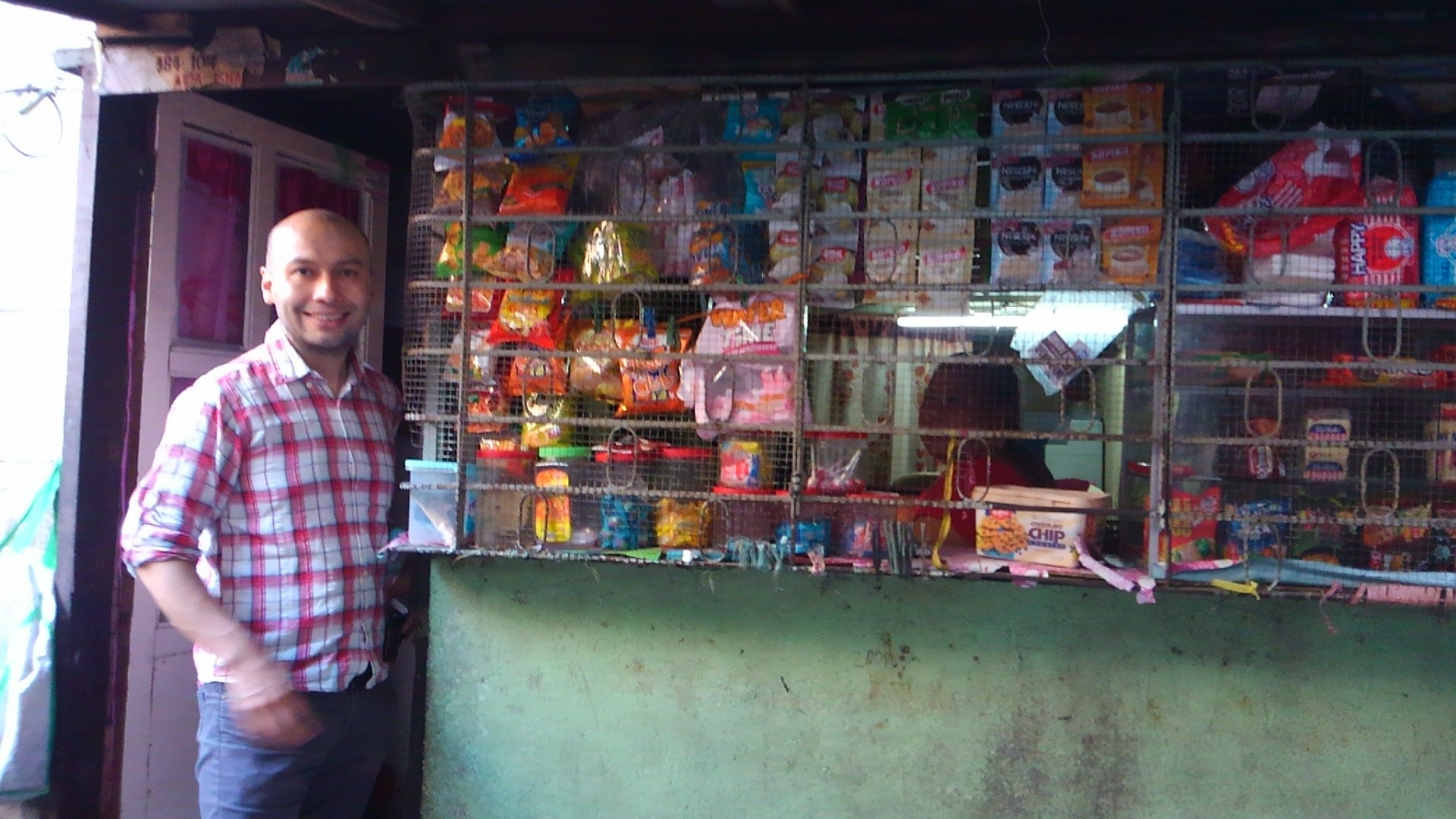 Here I am at the entrance of a sari-sari store in the slum of Dakota, Malate, Manila, where I regularly go to chat and interview family members. 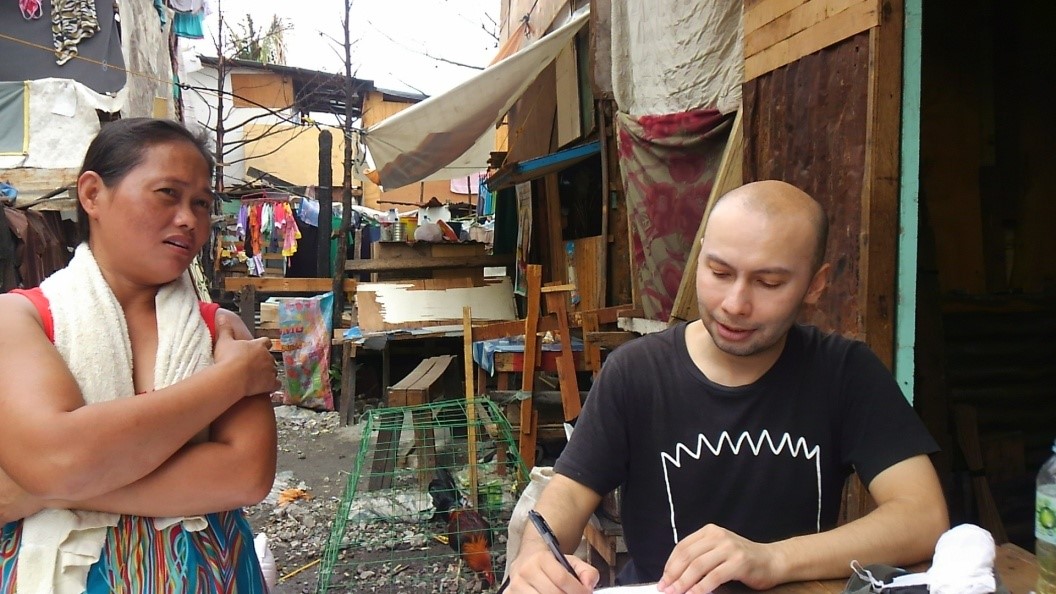 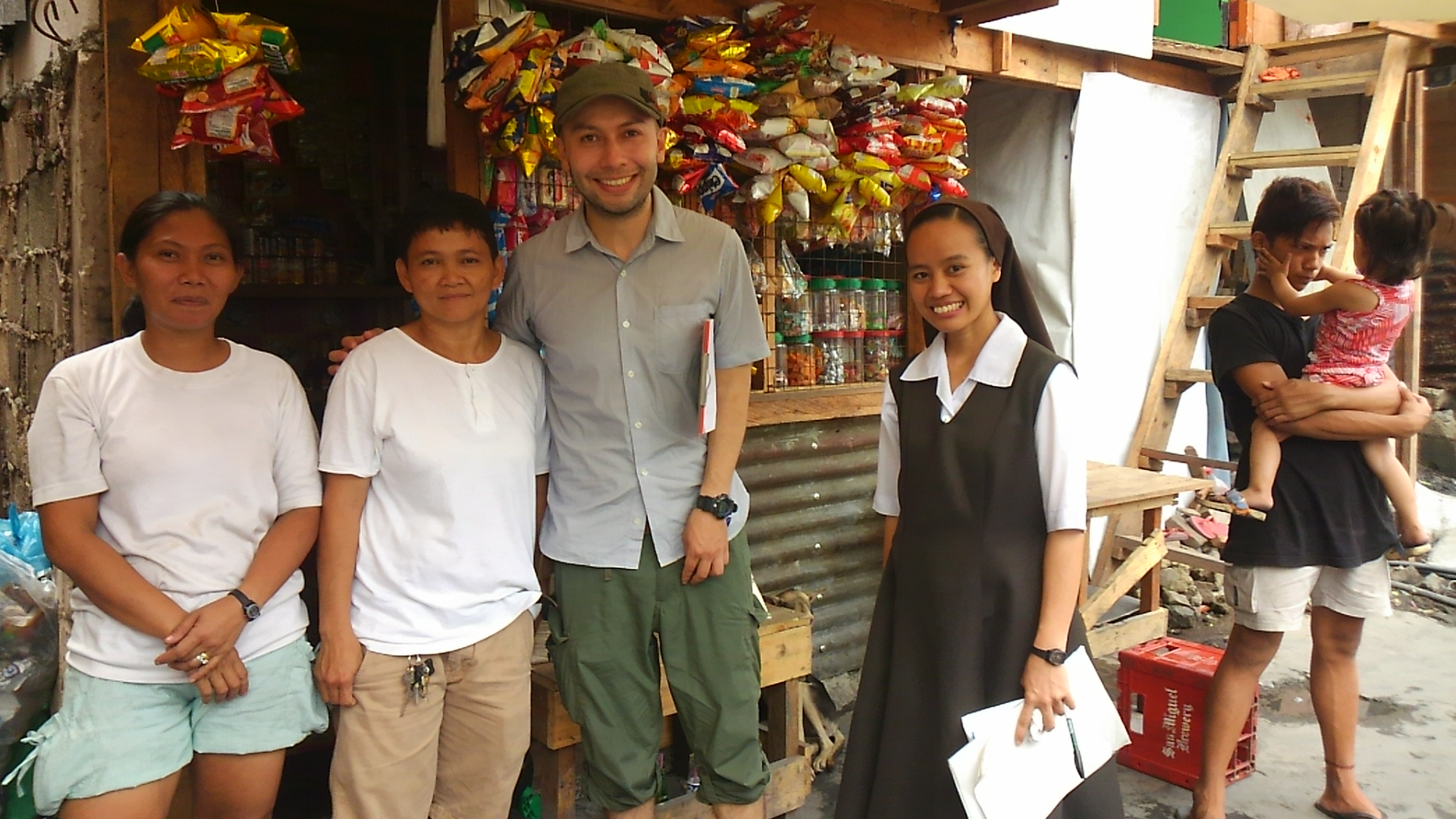 Here I am in front of a Nonoy sari-sari store in the slum of Meralco; to my right is the owner next to her is a woman who is my hostess in this slum. To my left is one of the younger sisters who helped me in my fieldwork. It was through her social network and trust that I was able to meet the people in Meralco. She also regularly translated for me what people were saying. 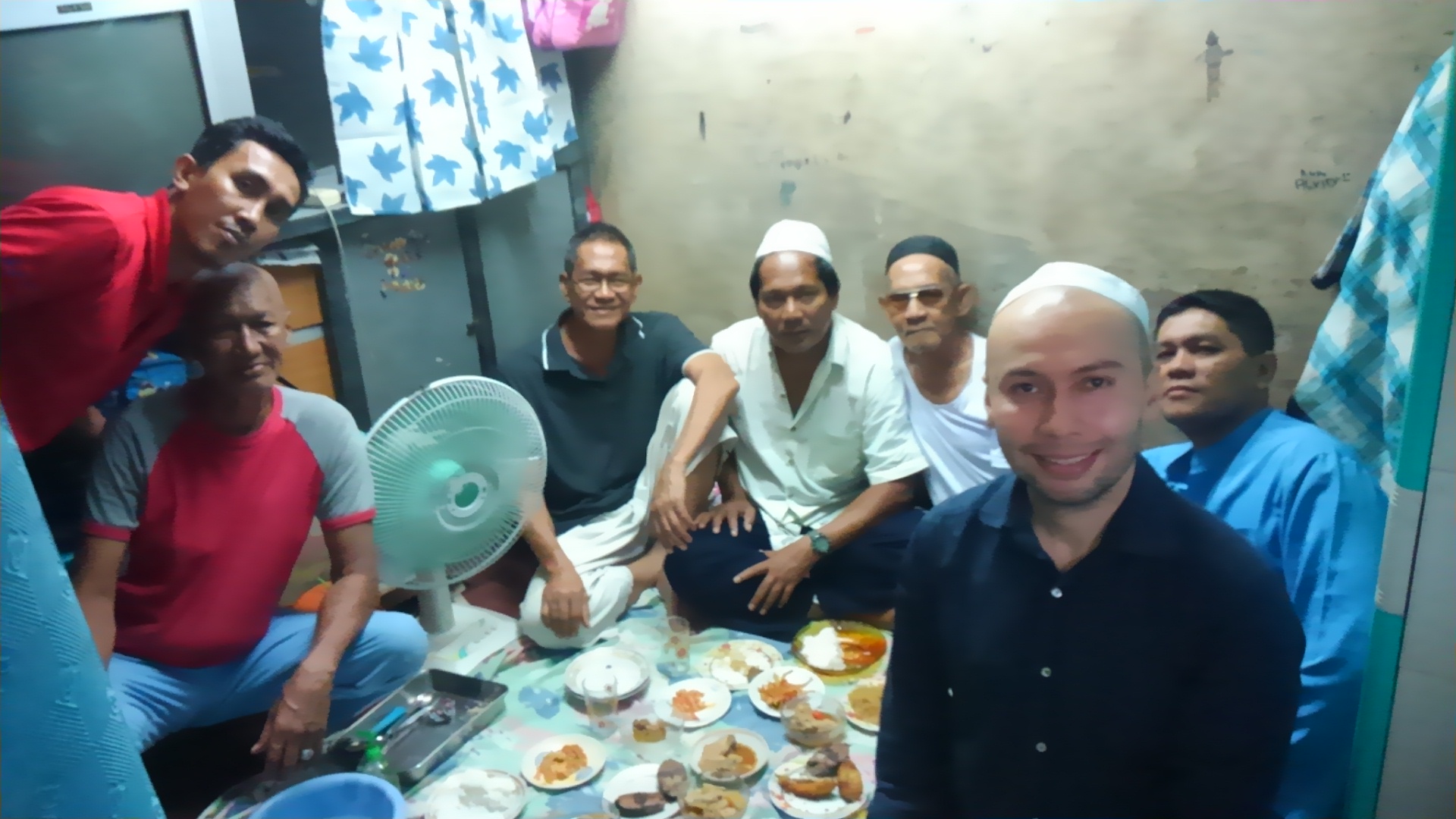 Here I am with some of the elders of the Badjau community in the Dakota slum in Manila, wise men from whom I learned abundant knowledge that changed my appreciation of food, society, politics and life itself. 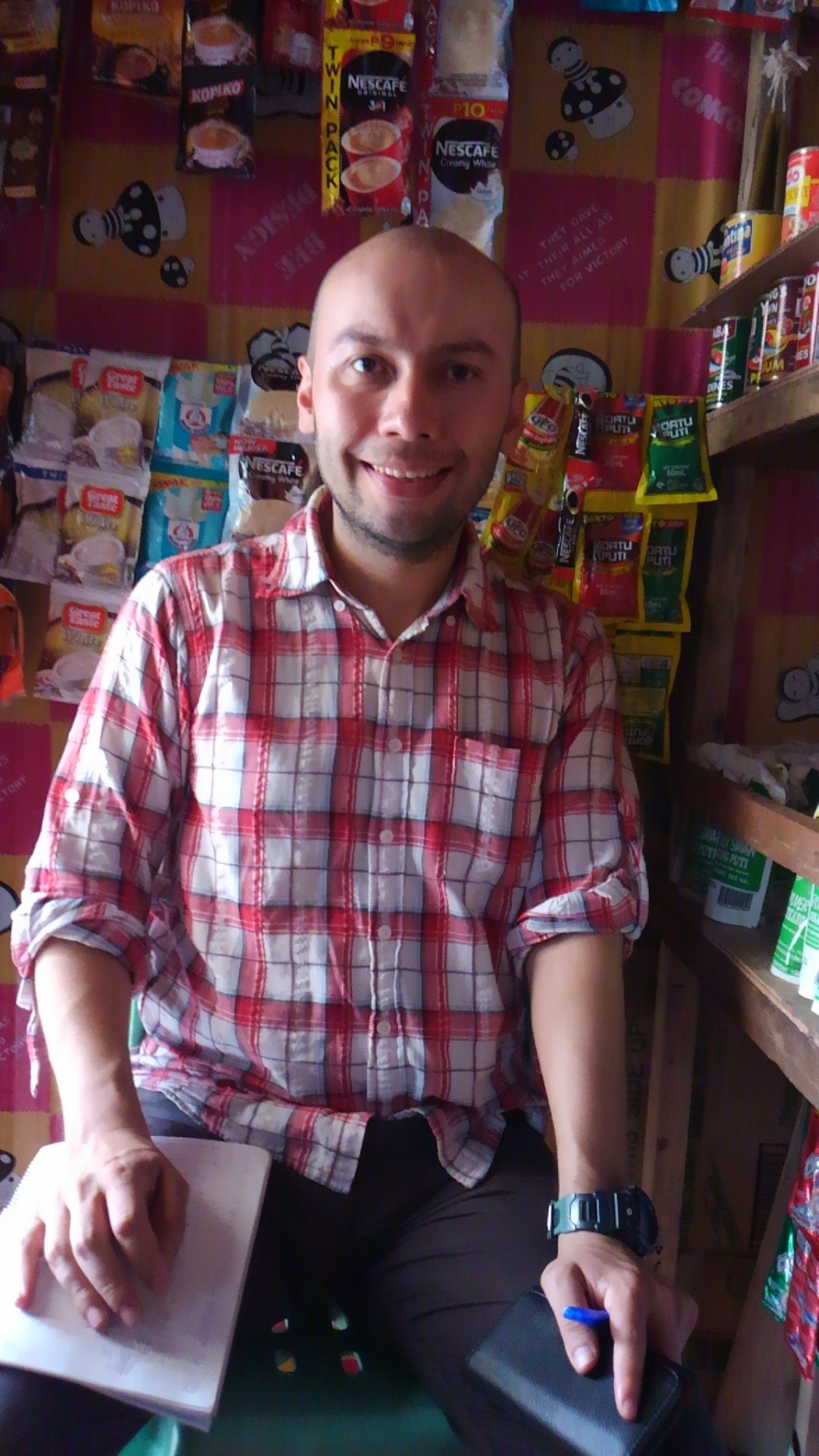 Here I am inside the Nonoy Sari-Sari store on a day when I stayed inside from 8 am to 8 pm to take note of a Sunday activity inside Meralco squatter. This was a key part of observing the social reality of the slum from inside the store. 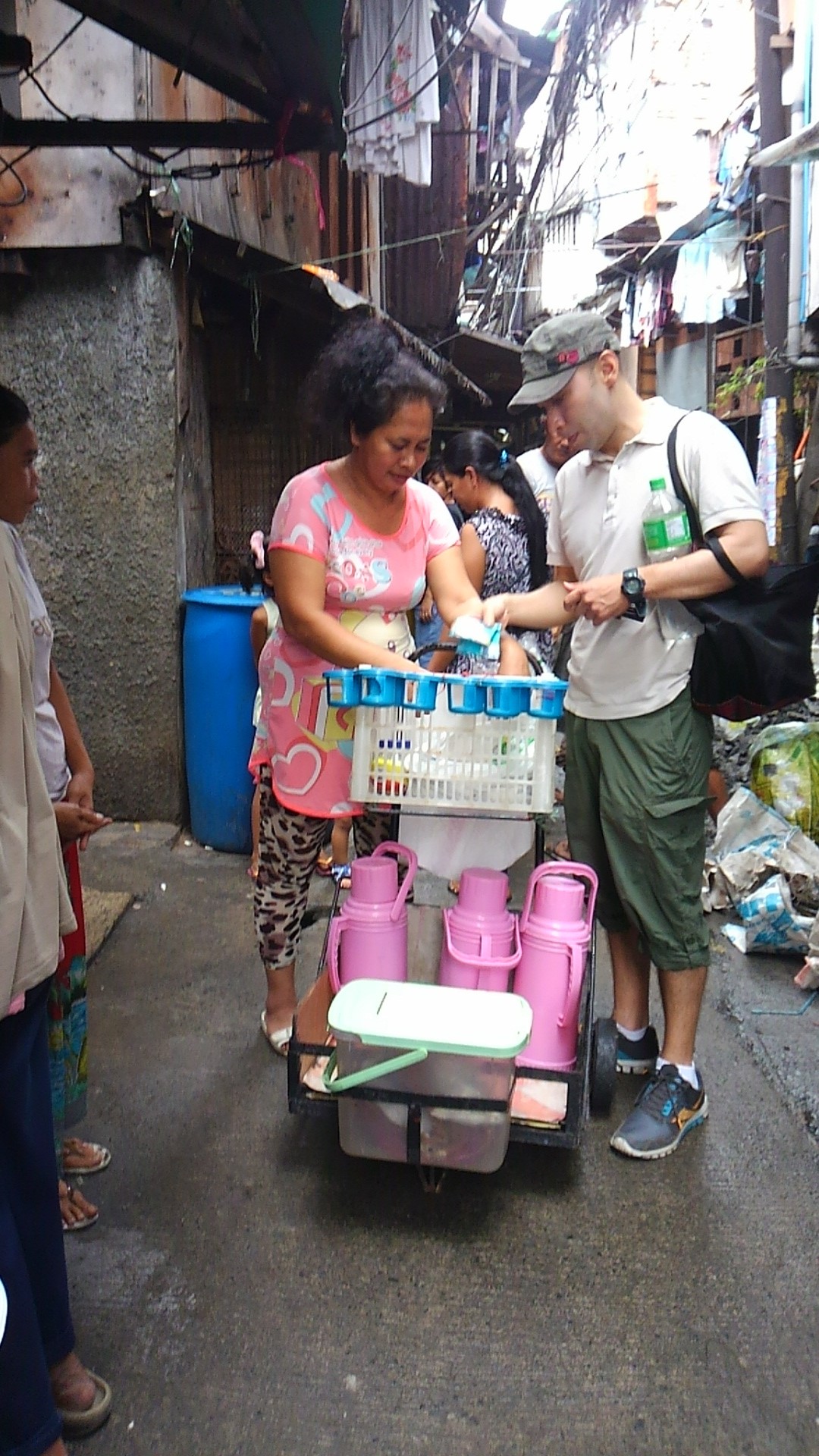 Here I am with a Badjau vendor, who sells packaged drinks and some snacks inside Dakota and in Manila Bay, although lately there are more restrictions on vending in the bay promenade.

Please tell us about the books and
experiences that have particularly influenced you.

- My 25 years living in the periphery of Mexico City. I saw my first assassination when I was 6 years old, outside a children’s party. But my first life memory was a fight and my father covered in blood at my own 3-year birthday party. At the time, my mother was pregnant, and my brother was born a stutterer. For this reason, I am not a fan of “fiestas.” Although I’ve attended dozens of them in my lifetime, I am always on alert for possible fights and try to prevent people from starting conflicts.

- My visits to my ancestors’ hometowns and territories in Zacatecas, including observing material evidence (guns, hats, bullets in the walls, stories, songs, etc.) of their participation in the Mexican Revolution along with Pancho Villa.

- The Ejercito Zapatista de Liberación Nacional (EZLN) uprising of 1994. The emergence of the EZLN came as a shock to the neoliberal governments of Mexico, the United States, and Canada, which were celebrating the initiation of NAFTA. The EZLN not only supported justice for indigenous peoples, but also offered a renewed political discourse and practice that continues to this day.

- Paulo Freire’s Pedagogy of the Oppressed

- Franz Fanon’s The Wretched of the Earth

Could you tell us about your ideal image of a researcher?

Ruy Mario Marini (a Brazilian scholar) is my main ideal image of a researcher. He was my first professor (of Political Economy at the National University of Mexico). Unfortunately, he suddenly became ill with cancer and returned to Brazil, where he died in 1997.

In the 1960s, he was tortured by the Brazilian military, as happened to some other professors. He then moved to Chile, where he created academic programs and shaped students before he was again expelled by a military, this time led by Pinochet. Fortunately, in Mexico he could continue his work and he developed outstanding academic scholarship as well as important courses and seminars.

Please tell us about the difficulties you faced in compiling the results of your research into a paper or book.

The difficulties have included:
- Finding the proper academic journal and academic group to publish my study, which does not easily fit established disciplines and norms
- Language (English and Tagalog)
- Writing skills
- Time, as the project is big and surpasses my current capacities.

Which books do you recommend for
young scholars and why?

For my area of study, I recommend the books I mention above. Why?

Proper study and comprehension of these authors (Marx, Gramsci, Foucault, Fanon, Freire, and Gonzalez-Casanova) provides the foundations for more than 80 percent of the critical studies in our contemporary time. With these foundations, there is limitless potential to go beyond. Criticize them or use them as a platform to go to next levels.

I also recommend The End of the Cognitive Empire by Boaventura de Sousa Santos (2018), as an introduction to scenarios that go with and go beyond the above-mentioned authors and books.

Please give us your short remark for some people who
wish to become scholars.

Don’t do this for money or job position.

Please tell us your future ambitions.

I have goals rather than ambitions. They are:

1)  Publish the results of my research, including a book and 3-5 papers about eating, cooking, and retailing of packaged food, using the data about Manila and Mexico City that I have obtained in 2021 and complementing this with the data I gathered during my doctoral research.

2)  Find a way to continue as an academic, either as a lecturer, researcher, or assistant professor in Political Economy and/or related critical social sciences.
Long term (More than 20 years ahead):

-   To create a new academic program in the social sciences with the support of a small group of students in Japan, the Philippines, and Mexico, or an unpretentious mirror of what Ruy Mario Marini did in Brazil, Chile, and in Mexico.

1. Corporate Packaged Food (CPF) is a category of knowledge that I developed during my doctoral research to integrate analysis of food and beverages that are packaged, bottled, and canned by corporations. Food and beverages that display a brand name on the package are considered CPF. Condiments, oils, and fats may be included if they are packaged and bear the brand name of the companies. Beer and fast food are excluded, although the latter is sometimes packaged for take-out.