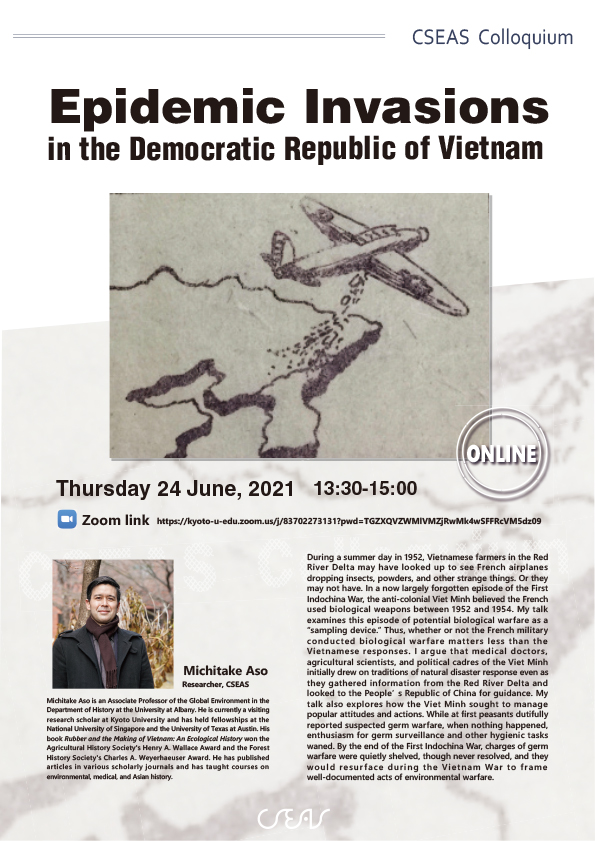 During a summer day in 1952, Vietnamese farmers in the Red River Delta may have looked up to see French airplanes dropping insects, powders, and other strange things. Or they may not have. In a now largely forgotten episode of the First Indochina War, the anti-colonial Viet Minh believed the French used biological weapons between 1952 and 1954. My talk examines this episode of potential biological warfare as a “sampling device.” Thus, whether or not the French military conducted biological warfare matters less than the Vietnamese responses. I argue that medical doctors, agricultural scientists, and political cadres of the Viet Minh initially drew on traditions of natural disaster response even as they gathered information from the Red River Delta and looked to the People’s Republic of China for guidance. My talk also explores how the Viet Minh sought to manage popular attitudes and actions. While at first peasants dutifully reported suspected germ warfare, when nothing happened, enthusiasm for germ surveillance and other hygienic tasks waned. By the end of the First Indochina War, charges of germ warfare were quietly shelved, though never resolved, and they would resurface during the Vietnam War to frame well-documented acts of environmental warfare.

Bio:
Michitake Aso is an Associate Professor of the Global Environment in the Department of History at the University at Albany. He is currently a visiting research scholar at Kyoto University and has held fellowships at the National University of Singapore and the University of Texas at Austin. His book Rubber and the Making of Vietnam: An Ecological History won the Agricultural History Society’s Henry A. Wallace Award and the Forest History Society’s Charles A. Weyerhaeuser Award. He has published articles in various scholarly journals and has taught courses on environmental, medical, and Asian history.