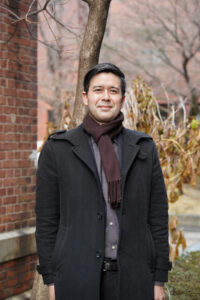 My current project examines a history of Vietnamese experiences with environmental warfare and diseases exacerbated by warfare during the Cold War. Those living in North and South Vietnam (and Laos and Cambodia) faced an environmental and social apocalypse. But even as millions were injured or killed, many learned to survive environments rendered hostile in new ways. These experiences helped form a “coping environmentalism,” which is particularly relevant in today’s world where individuals and societies face existential threats of climate change, air and water pollution, and pandemics.

In Kyoto, I will write about an early Cold War moment, namely the (non) use of biological weapons by the French during the First Indochina War. Starting in 1952, the Viet Minh became convinced that the French were dropping biological agents in northern Vietnam, aimed for the most part at destroying food crops. This moment set in place certain patterns of Vietnamese responses to environmental warfare, including the cooperation among medical doctors, agronomists, and other kinds of scientists. Vietnamese scientists also reached out to their colleagues around the world, including both those in the communist and capitalist worlds, to study, document, and resist epidemics and environmental warfare. I will also work on a chapter that compares malaria control and eradication in North and South Vietnam from 1954 to 1975. Malaria control efforts in the north seemed to be much more successful than those in the south and I will explore a few possible explanations as to why.